What is a comorbidity?

Disorders do not always appear alone, but another one (or more) might be attached with it. For example, those with anxiety disorders may also suffer faster from depression. In the medical terminology this is known as a comorbidity. I also have a few extra comorbidities.

Science has discovered that autists may experience various of co-morbid disorders and conditions. They will not only meet the diagnostic criteria for autism, but also meet the criteria for other disorders.

The first eight are the most common ones and the bold printed are diagnosed with me:

Six of the eight conditions are already very common to be found with autists. Hereby I will give a little bit of information how those conditions affect my life. Of the other cormobidities I cannot write, because I do not have any experience with them..

I am every day very busy, doing multiple things at the same time, jumping from one topic to the other, got mood-swings a woman could get jealous about and am inattentive at it’s best. More information about living with ADHD can be found here.

A lot of the effects of ADHD can be kept under control with various shamanistic rituals. Age also defines a huge factor in getting those rituals right, without having to use pharmaceutical products.

Medicine: Rilatine 20mg MR (+10mg); when I need full (+longer) focus and my stimuli are totally not under control..

Social Anxiety Disorder (SAD) is also known as a “social phobia” and is characterized by a significant amount of fear in one or more social situations causing considerable distress and impaired ability to function in at least some parts of daily life.

For me it evolved before towards panic attacks, eating disorders and substance abuse.

Mostly I am “shy” or “unsure” towards others, because of this social anxiety. Making friends can be compared with the picture here to the right…

Because of all these comorbidities and the frustrations they cause, depression has become a word which is said by many health-care workers in my network.

Depression is thought to develop and occur more in high-functioning individuals (like me) during adolescence, when they develop greater insight into their differences from others.– Mash EJ, Barkley RA (2003)

I have been trying many medicines to treat depression, of which most failed because of their extra side-effects, making it more a hell to have those extra symptoms, upon the list of regular problems.

One of the most known symptoms is weight-gain.

I am currently free from any anti-depressants and still try to keep a smile on my face. Therapy helps with a psychologist and a psychiatrist. Talking and writing helps too. Most anti-depressants got the awkward side-effect to trigger suicidal thoughts, which I do not want to have in my mind. 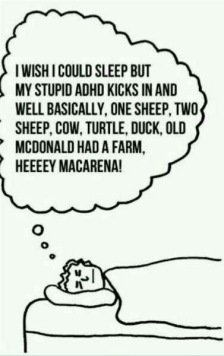 Story of my life. Insomnia is my middle name. Exactly the reason why I got to find ways to relax, to control my stress levels.

Not enough sleep can render me useless till weeks.

About 53-78% of individuals with autism have sleep disorders. Unlike general pediatric insomnia, which has its roots in behavior, sleep disorders in autists are comorbid with other neurobiological, medical and psychiatric issues.

Medicine: None – I don’t like the side effects and try to release my stress.

About 30% of autists also got OCD. This is a quite funny disorder with huge implications on functioning in daily life. I have however found a few shamanistic tricks to beat that OCD without taking extra medicines.

Most OCD treats are under control, with the exception of some. When I feel the urge to have recurrent obsessive thoughts or compulsive attacks, I know my OCD is starting to take control over my mind. Mostly, I tend to break that rhythm by breaking the OCD forcefully.

An example: When my OCD wants me to have everything arranged by alphabet while not needed, I put on two different socks with a total different color. It confuses my mind and “breaks” it in a way, that I have to accept that I am wearing different socks.

Perfectionism can go too far; when something has to be finished. At that moment, I try to break my OCD by including imperfections in my task, drawings, music or texts, just to break my mind and not fall into the same repetitive OCD routine, till no ending…

Medicine: Abilify; but do not use, because of too many side-effects and I got several natural mind-breakers to break those OCD routines, so don’t require this medicine.

About 42-88% of autists are having the comorbidity with unusual responses to sensory stimuli. The filtering system in my head seems to be “broken”, or not even present, making it very difficult to divide all those sensory inputs and try to individually process them.

A few of these stimuli include:

These stimuli also have a bad side, when sitting at a restaurant for example, I cannot split the conversation at the dinner table with all tables around it. I hear virtually every conversation going on without having the natural ability to divide and focus upon one, making me mentally exhausted at the end of the dinner.

Medicine: Rilatine; when I need full focus and my stimuli are not under control.. 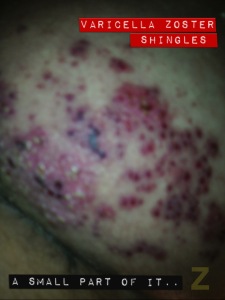 I got an oversensitive nervous system. The higher my stress levels, the more sensitive I can get for any form of touch or temperature. My immune system is a communication vessel with my body.

When I become too stressed, I sometimes get sick. If this stress happens for too long, I can end up with a burn-out, that give me nervous infections that hurt like hell! I had this once and wish not to have this twice.

I am still having chronic pains because my nervous breakdown was not treated on time! It all happened at huge amounts of stress!

Medicine: Redomex; but don’t like to use it, so I live with constant pain.

The infection is entirely gone, the neurological pain is the fall-out for many years.

When too stressed, stomach pains, re-flux, irritable bowel movement, diarrhea and suspected autistic enterocolitis happen to dominate my toilet bowl. Nobody likes to talk about his own shit, so I will spare you the juicy details from now on.

Medicine: Nexiam for re-flux, no painkillers, mostly adapt my food to get better.

3 thoughts on “What is a comorbidity?”